A $500 Jake Shimabukuro-signed ukulele, and other stories 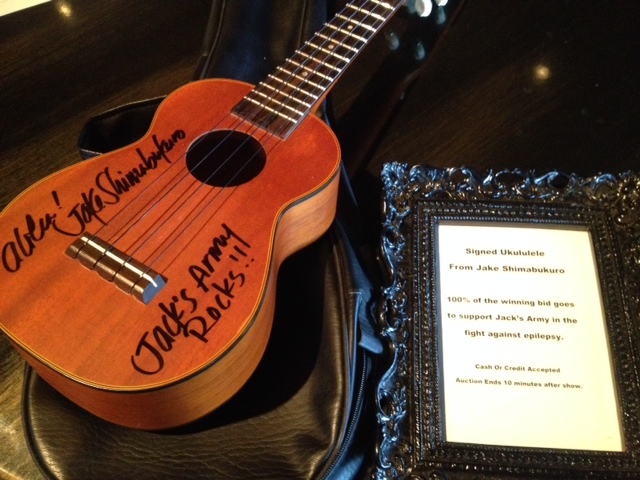 I met Jack's father Mike in high school one miserable, humid day in Boca Raton, FL. We were young guns trying to make our way on the Pope John Paul II high school basketball team. It was fairly evident early on that neither of us would be pursuing a career in the NBA, but "Salt of the Earth, Won't Play A Second" and "No Talent, Has To Play" (as our coach dubbed Mike and me, respectively) stuck with it for all four years. College sent us in different directions but the friendship endured.

I was in Hawaii when Jack was born and I remember Mike's message that "there was a problem" in the hours after the delivery. It was a heart wrenching experience watching my best friend and his beautiful new wife grapple with the unknown. The year that unfolded was full of ups and downs and it took its toll on the family. When the opportunity arose in 2010, I ditched my job in Hawaii to follow my muse as a music writer on tour with Cowboy Junkies. My home base for the journey became Mike and Liz's basement where two TV's and an infamous purple blanket were all I needed to stay warm and content. It was a wonderful experience living with them and learning more about Jack's condition. The annual Jack's Army golf tournament inspired me to become a more serious golfer, and winning it someday will be my Masters.

Growing up in Florida, one of the first concerts Mike and I ever attended together was Jimmy Buffett at the Sunrise Musical Theater. We were instantly transformed into Parrot Heads. The mix of rum, beach bum laziness, and general disregard for taking life too seriously fit us perfectly. When I took a job working for Jimmy Buffett in Hawaii, Mike was probably even more excited than I was. Hawaii is full of talented musicians and ukulele master Jake Shimabukuro was one of my favorites. We became friends during my time working with Jimmy Buffett as Jake began touring with Jimmy and playing in his band.

Last night in Las Vegas, I had the privilege of watching Jake play the venue I now manage. As soon as Jake recognized me last night, I was greeted with a warm hug and we caught up on the missing years. I mentioned my time in Wheaton, IL, with Mike and the family. I talked about the amazing work of Jack's Army and asked Jake if he could sign my old ukulele for a charity auction. He was eager to participate, and I put together an auction just before we opened doors for the concert. Two fans began to bid aggressively as the ukulele became a two-horse race.

After the show, I was pleased to see the winning bid was $500 from a huge Jake fan. As Jake came out after the show, he gave the winner a hug and thanked him for supporting Jack's Army. It was the kind of night where everyone went home happy and Jack's Army took another small step forward on the road to a cure. 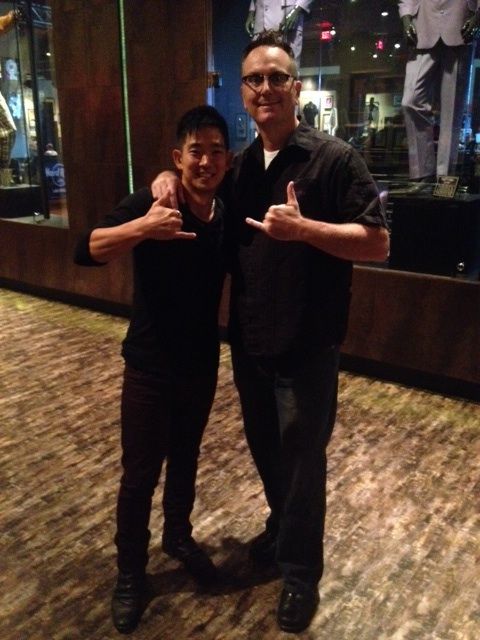 Jack's Army would like to thank Jake for his support. And to his fan who won the auction: Thanks, man! And of course, hats off to the talented Jason Lent for his creative fundraising and for this dispatch from the road.

Thank you to the Lowell Eagles! 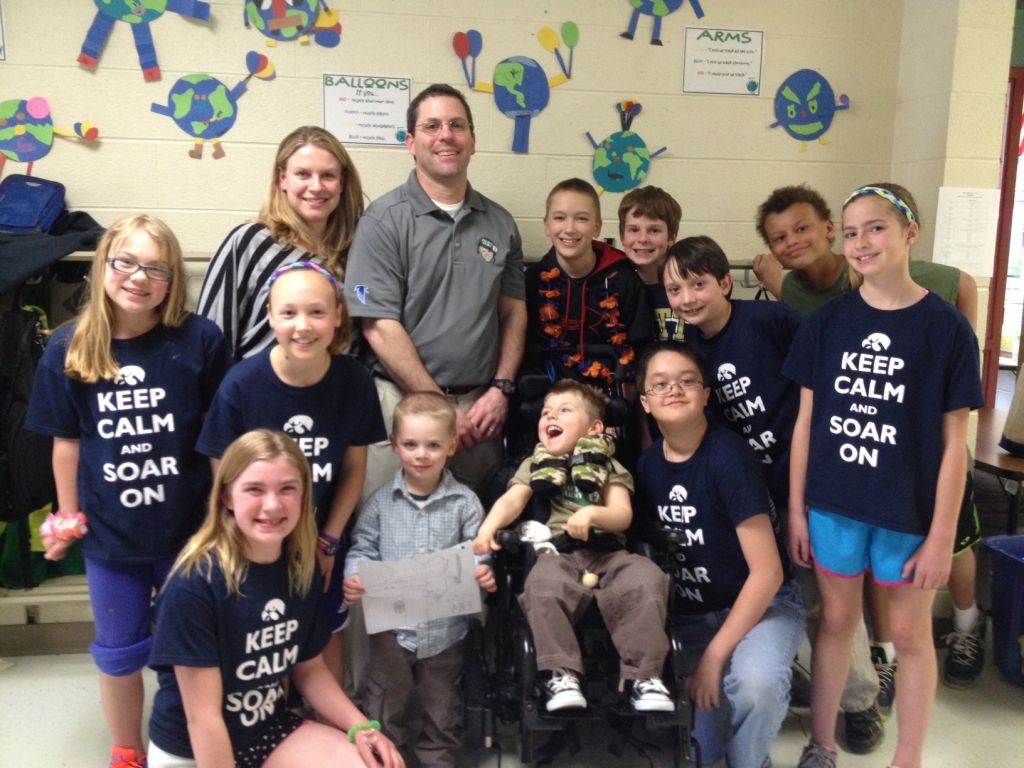 The visit gave students a chance to learn a little bit about KCNQ2-related epilepsy and how, even though it is a very uncommon disorder, lessons learned from studying this condition can help researchers understand the bigger picture about epilepsy and its causes.

The kids asked many good questions, most of them on much simpler topics: "What does he eat?" "Can he talk or play?"  "What is his day like?" Their curiosity about Jack as a boy shows that at the heart of any support for a cause like Jack's Army lies compassion.

The students received magnets and t-shirts, and also learned about how through the foundation, the website, and social media, Jack’s Army has been able to help find and assist other kids around the world. They were amazed at the impact one little boy can have.

And they took that lesson to heart! The Lowell school community raised $700 for Jack’s Army!

Mike and Liz were blown away. Liz thanks Mrs. Denise Uthe for inviting them to Lowell. She says, "The 5th grade class and teachers really welcomed us with open arms and they were very determined to raise money for the foundation.  They are an unbelievable group of kids and we are so happy that they picked the Jack Pribaz Foundation."

After the visit, their teacher had the students write about their experience of meeting Jack and his family. Some of their responses are posted at their school blog. We are touched and grateful for their support.

Mike Pribaz sends out his personal thanks: “This is another wonderful example of this community stepping up to help a family in need. It is so encouraging to see such energetic and caring kids taking part in such an important cause. We could never thank the Lowell family enough for all they have done for Jack and those who share his condition around the world.”

Mike and Liz and the boys look forward to revisiting Lowell on June 10 for a school assembly. They are eager to meet all the amazing students and staff who helped make the fundraiser such a success. See you again soon, Lowell! 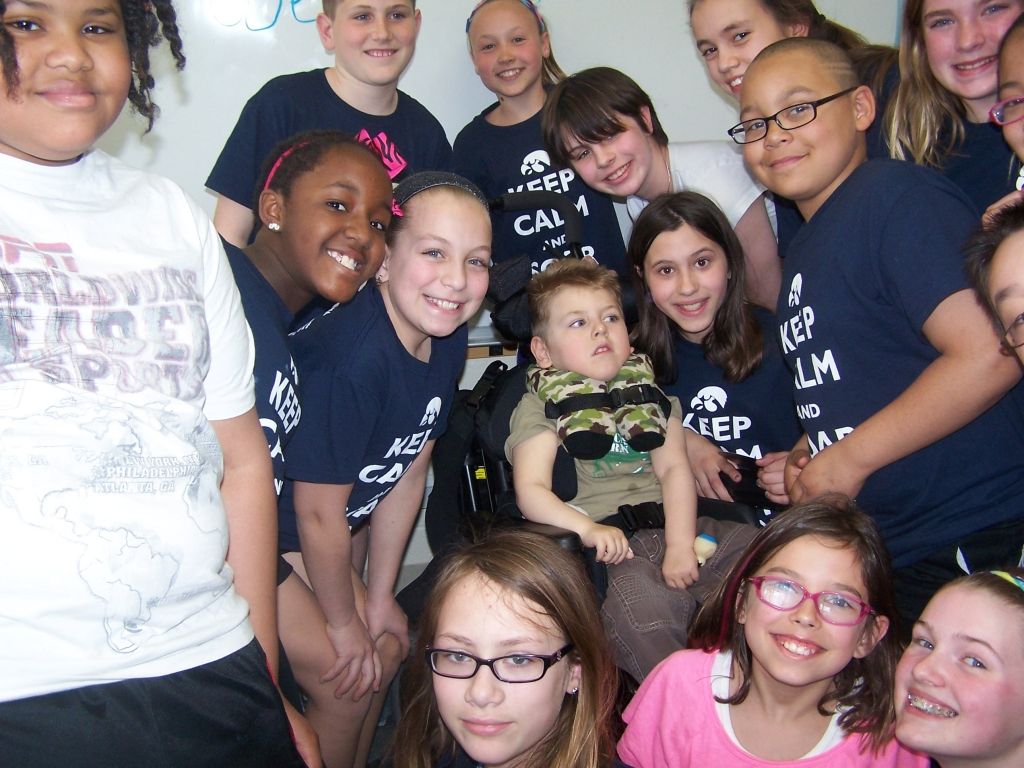 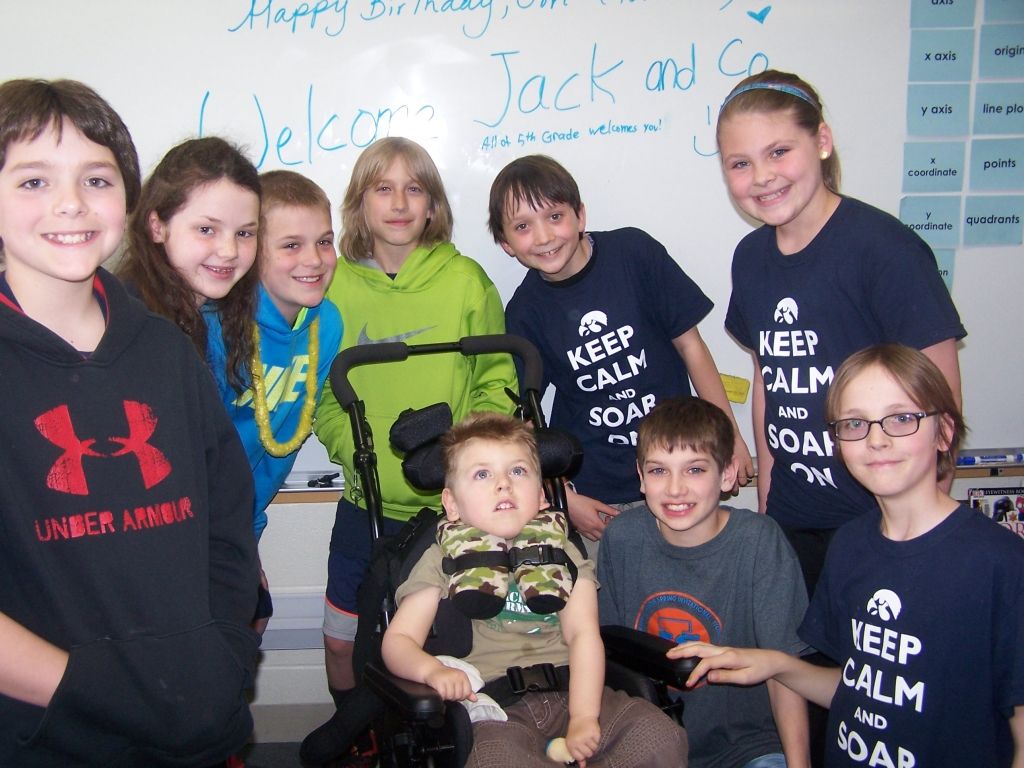 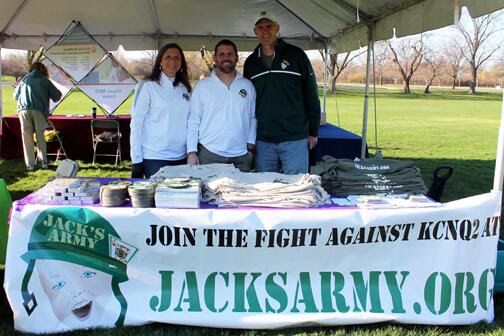 Jack's Army marched on Wheaton, Illinois, on Saturday, April 26. The Epilepsy Foundation of Greater Chicago's annual 5K walk/run was held in our own backyard at beautiful Cantigny Park. The weather cooperated, the sun smiled on all the walkers, and it was a great day.

For the first time Jack's Army had a tent, which gave us the opportunity to pass out t-shirts, car magnets, and informational brochures. And, of course, it was great to get a chance to talk with people and tell them about KCNQ2-related epilepsy.

Many who stopped by were amazed at how quickly our organization has grown and how much impact we have made already. One family was eager to learn about KCNQ2 because their child had no diagnosis and had not been tested. It was great to be able to tell that family that there is now a rapid test available. Even just last year we would not have been able to offer that idea. Thanks, Dr. Cooper!

There is still much work to do to get the word out. Even within the epilepsy community in our own neighborhood, many people had not heard of Jack's Army or KCNQ2-related epilepsy. Having a booth at this big event was a great asset to our cause.

We value the partnership between Jack's Army and The Epilepsy Foundation of Greater Chicago. which hosted the annual fun-filled 5K run/walk. With 1200 people walking, they broke attendance records--up 25% from 2013.

Two more Chicagoland Epilepsy walks are yet to come: May 3 in Libertyville and May 10, the largest of the three, downtown at Montrose Harbor. Need more reasons or locations to participate? Click here. 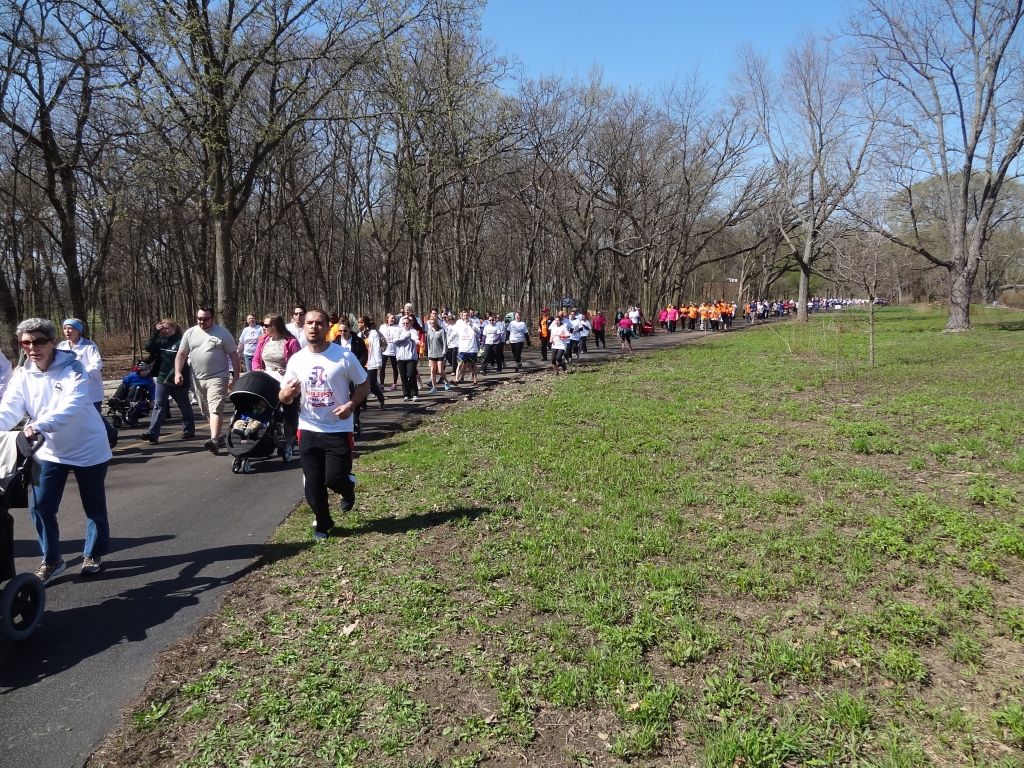 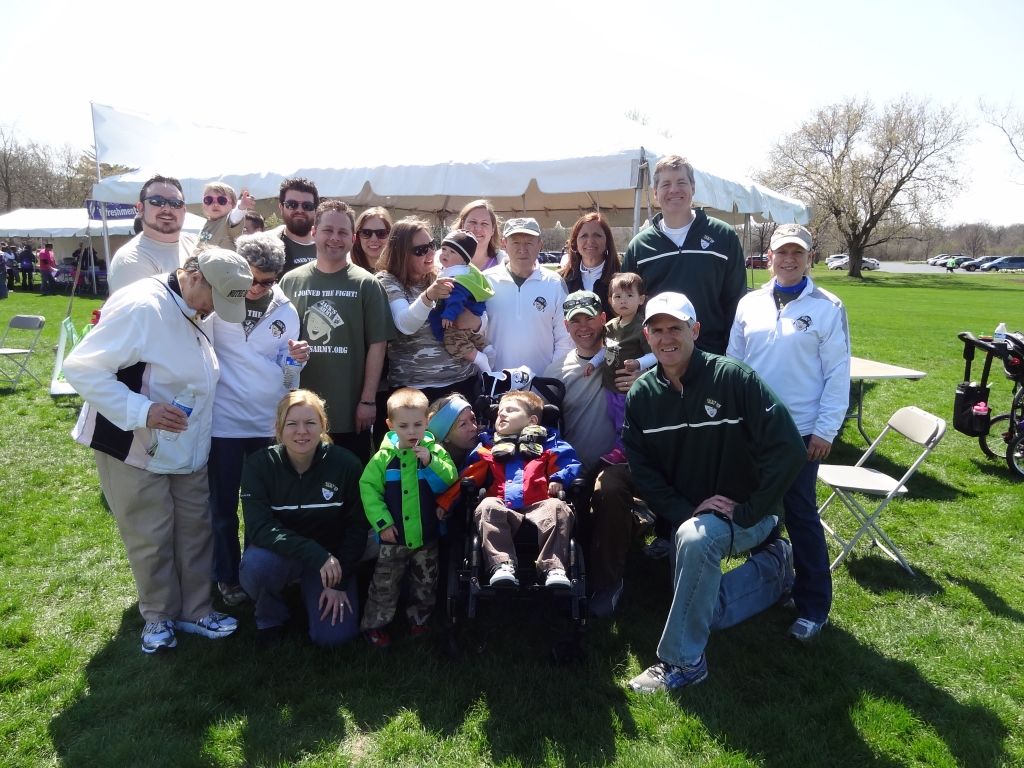 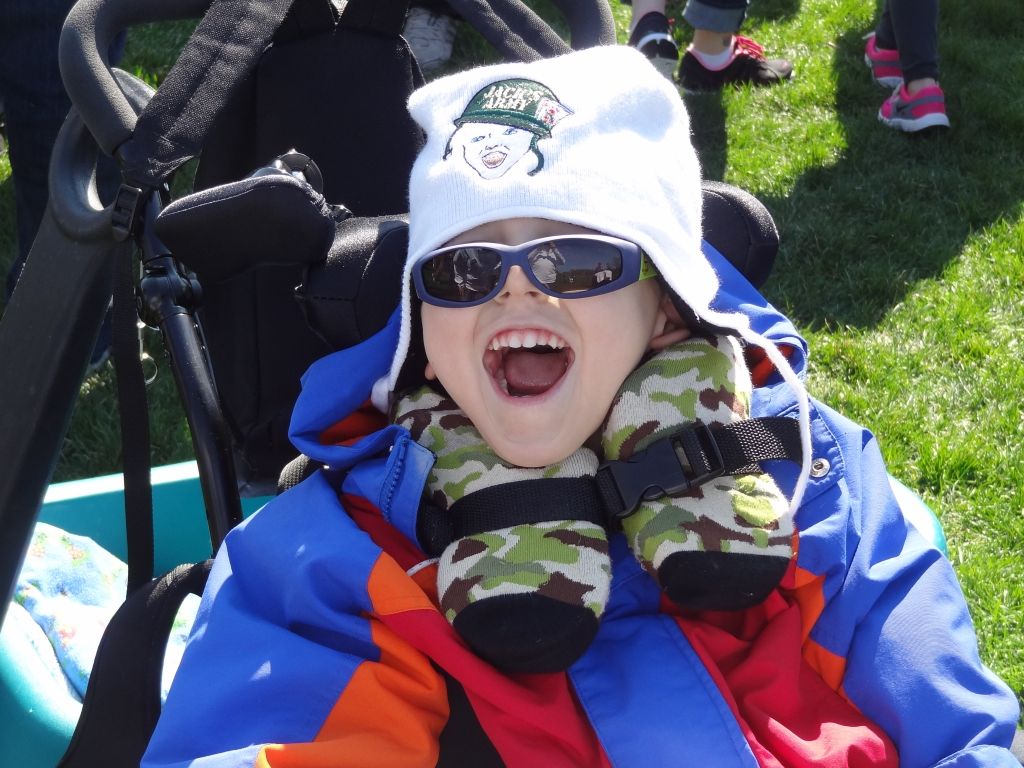