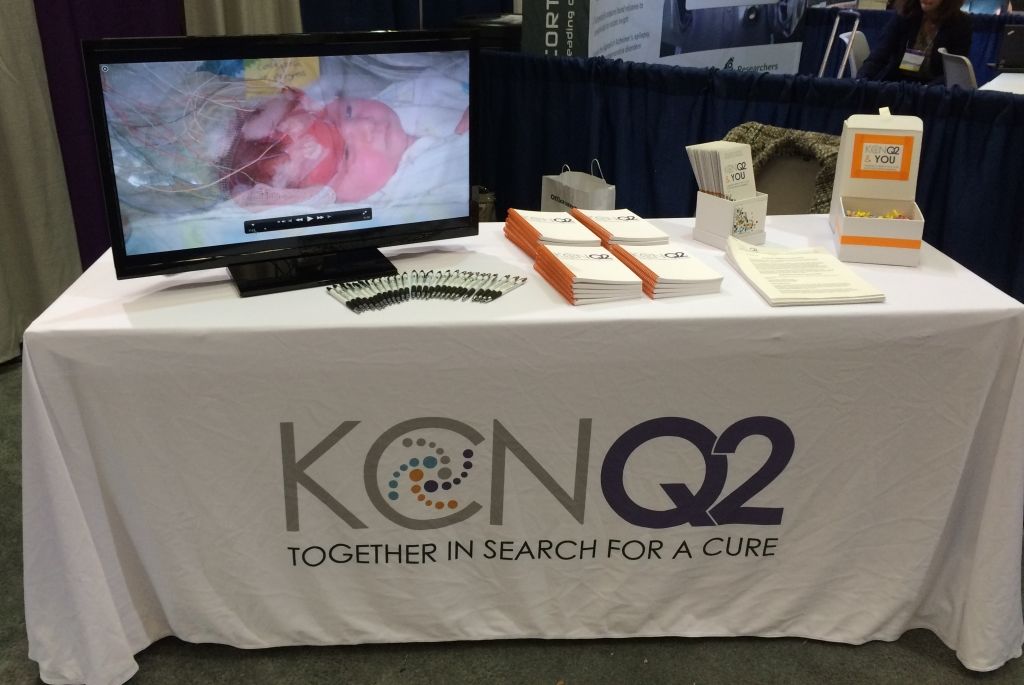 If you were a doctor or researcher working your way through the exhibition hall of the American Epilepsy Society’s Annual Meeting in Seattle last week, you would have noticed something new this year. For the first time, KCNQ2-related epilepsy was represented. The Jack Pribaz Foundation (JPF) sponsored a big corner booth and a banner that splashed our message overhead on a 20-ft. LED display. With our purchase of the LED spot, we had exactly 15 seconds (looped repeatedly over three days) to catch the attention of the more than 4300 doctors and researchers, plus potential advocacy and industry partners, who wandered the exhibition hall. “KCNQ2” was on the screen for the entire spot, to help people get used to seeing it among the alphabet soup of rare genetic epilepsies: PCDH19 and CDKL15, for example, plus the better-named disorders and their interest groups that have been around longer, like Lennox Gastaut Syndrome, and Dravet Syndrome. In the LED banner ad we also animated the four-armed logo to reinforce our four strategic aims, which we came to Seattle to advance. So did we accomplish our mission?

In Seattle the JPF announced our new research grant application process. In the booth and online, instructions are now available for researchers who wish to write a letter of inquiry to initiate the process of applying for financial support. Our scientific advisory panel will help determine which proposals will merit funding. Even though most of the doctors attending the AES meeting treat people with epilepsy, a fair number of them answered no to this question. We talked to hundreds of people, passed out pamphlets, pens, notebooks, and handshakes. Dozens of folks signed up to receive our free Q2 newsletter. And the reviewers who will be scoring Dr. Cooper’s Center Without Walls grant proposal are likely to have been there and will have noticed the flurry of interest that KCNQ2 was generating in the exhibit hall and in the research presented in the scientific sessions.

We want to thank Jim Thompson, Annika’s dad, who volunteered to travel from Iowa to help us man the booth and work the crowd, which he did brilliantly. It was wonderful to get to spend time with him. Thanks, Jim!

In a way, Jim wasn't the only parent representing the KCNQ2 community with us. On the table in the booth we set up a monitor that looped the banner ad with the video Lisa Miller made this summer (see link) featuring the faces of so many of the KCNQ2 kids whose families have joined together in this cause. Many stopped by to watch it, to put sweet faces with the KCNQ2 name. The children have an important story to tell, and the medical community is starting to listen. There’s so much more work we can do together. Numerous visitors made it a point to tell us that this foundation work is important, that it truly helps move the ball forward. That was nice to hear, and we are proud to pass that praise right along to you, our partners who support us in big ways and small. #togetherinsearchforacure!

In Seattle we networked with clinicians and researchers from across the nation and world. We met with our scientific advisers and some of their colleagues,and heard more about their work. We made some friends among the pharmaceutical set, too, and are following up with them about some exciting educational partnership ideas. Stay tuned.

But perhaps the most promising development at AES was being invited to attend a pre-conference meeting run by Professor Anne Berg of Lurie Children’s in Chicago. Together with several clinical, research, industry, and parent advocacy leaders in early life epilepsy, we talked about concrete ways we can collaborate. While our different genetic conditions alone may be rare, the argument is starting to be made that, considered together, the kids who have early life epilepsies account for an important clinical population that needs more attention. How can our different groups find ways to work together toward common goals? In Seattle that conversation expanded to include new voices, and we are thrilled to have represented KCNQ2 among them.