[dropcap]L[/dropcap]iam Alexander Tricoche was born May 21, 2010 at Columbus Regional Medical Center in Columbus, GA. His birth was and uneventful scheduled, repeat c-section. He was the picture of health weighing in at 8lbs 5oz and measuring 19 3/4 inches long. 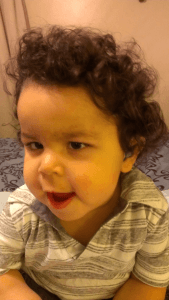 Liam began having seizures several hours after being born. After having his seizures observed he was moved to the a Special Care Unit where an MRI was done and a Spinal Tap was performed. All results were normal and after his MRI he began to desaturate during his seizures. For closer observation he was moved to the Neonatal Intensive Care Unit where a Phenobarbital regimen was started. After 18 days of pushing the dosage of Phenobarbital higher and higher, preforming test after test with no answers or clues as to the cause of the seizures, Liam was transported to Children’s Healthcare of Atlanta at Scottish Rite. He was placed in the Pediatric Intensive Care Unit where we were able to meet with a Pediatric Neurologist. After another EEG and MRI, the doctor decided to start Liam on Keppra which she felt would better control the seizure activity. After 11 days in the hospital there Liam was released to go home. He was still having seizures and we were slowly increasing the new medication and decreasing the old.

Since then Liam has been hospitalized once for a seizure cluster lasting longer than 30 minutes. Liam’s last known seizure was April 25, 2011 which caused us to change the anti-seizure medication to Trileptal. Since then, he has not suffered another seizure. Liam has hypotonia, mild strabismus, pervasive developmental delay and has always suffered from reflux. Liam receives Physical Therapy, Occupational Therapy and Speech Therapy on a weekly basis. He is unable to walk or talk and is completely dependent upon someone else to take care of his needs. He is essentially still a newborn trapped in a two year old’s body. July 15, 2011 Liam had a muscle biopsy and was later diagnosed with Mitochondrial Disease based upon biopsy results. We then began additional medications for the diagnosis, one of which was not covered by insurance.

After almost a year with this diagnosis we began seeing another specialist in Mitochondrial and Metabolic disorders. At this appointment she explained that she would like to run testing to dig deeper and possibly find out where the Mitochondrial gene mutation was occurring. The new specialist also wanted to test for any false positives in the original Mitochondrial Disorder diagnosis result. We agreed to the testing and had it done straight away due to the delay in results.  After a few months we got an unexpected result on the epilepsy panel. It showed that he has a KCNQ2 gene mutation and that his Mito diagnosis may be a false positive.

We’ve grown used to the feeling of perpetual mystery and helplessness. Liam, who has been pricked and prodded and probed more times than we care to count, seems to take everything well and though he is not developing as we might have hoped, he remains a symbol of love and hope and the reason why families and society at large must defend the defenseless and work tirelessly in the pursuit of scientific discoveries which may force these types of dreadful mutations to disappear from the genome.