Once upon a time…

Jack’s story started like so many others. In those happy, hazy hours after their first baby was born, Mike and Liz Pribaz were your typical over-the-moon new parents. They marveled at their beautiful son, Jack Wyatt, who arrived with a full head of hair. At Central DuPage Hospital in Winfield, Illinois, they began learning all about their boy: who he most resembled (Liz), how to change his diaper (which scared Mike a bit), and how light and easy eight pounds, six ounces of pure joy could be to hold in their arms. It was the morning of March 5, 2009.

But by 4 am a nurse noticed something wrong. After consulting with the NICU doctor, she woke Mike and Liz with frightening news. “Jack seems to be having seizures,” she told them, and from that moment forward, Jack’s story changed forever. 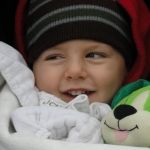 The 17-hour-old was taken to the NICU, and the tests began: blood work, spinal tap, CAT scan, MRI. They put leads on his scalp and hooked him up for an EEG, but his brain wasn’t giving up any secrets just then. All his other tests came back normal. Mike and Liz steadied themselves with statistics that sometimes babies are born with unexplained seizures that disappear on their own after a few weeks or months. Everything else about Jack seemed healthy and normal. Doctors started Jack on anti-seizure medicines and sent him home.

But the seizures didn’t disappear. Before March was over, increasing seizure activity caused Mike and Liz to bring Jack to Children’s Memorial Hospital in Chicago. New EEG tests there revealed devastating news: Jack’s baseline brain activity was severely abnormal. Jack, they were told, might not make it to his first birthday. Doctors took samples of Jack’s blood to send to laboratories across the globe; it would be tested for the rarest genetic and metabolic disorders. They would have no real answers for several months, and they warned Mike and Liz that there might never be a diagnosis. This concept—to have to live with the unknown—was one of the hardest things for the new parents to process: how do you plan for a future you cannot imagine?

Jack’s case was placed under the wide umbrella called “epilepsy,” and Mike and Liz learned the staggering statistic that up to half of all epilepsy cases don’t have a known cause or defined underlying condition. Besides a series of standard anti-seizure medications, doctors offered two treatments for Jack to try: a ketogenic diet—which for an infant would require a special low-carbohydrate formula; and injections of an incredibly expensive and experimental drug called ACTH. Mike and Liz accepted both options and took Jack home, along with a lengthy and complicated set of instructions for his care. The new dad who had been squeamish about a poopy diaper was now giving his son daily injections. But Mike and Liz—and Jack Wyatt, whose middle name means “brave, strong warrior,” would take on the fight, even though at this point in Jack’s story they didn’t yet know what enemy they were battling.

The injections and diet seemed to be successful in controlling Jack’s seizures, and repeat EEG test showed that the electrical activity in Jack’s brain had changed dramatically for the better. These encouraging developments took a great strain off Mike and Liz. 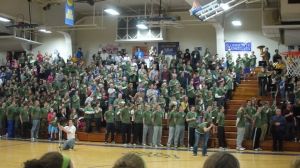 As Jack began spending more time at home than in hospitals, some semblance of a normal life started to emerge. His parents got used to all their special tasks. At three months they enrolled Jack in the Illinois Early Intervention Program to make sure he was getting all the support available. And Jack celebrated his first birthday with a big party and special low-carb ketogenic cake Liz made.

However, as the threat of seizures seemed to decrease, it became increasingly obvious that Jack was not developing normally. He missed milestone after milestone. Mike and Liz, and all their family, struggled to stay positive.

A supportive network of family and friends continued to grow around Mike and Liz. Liz’s sister Anna quit her job to help with Jack. Grandparents, aunts, uncles, and cousins helped however they could. Mike, a history teacher and coach at Wheaton North High School, received an outpouring of support from friends and fellow teachers. No one wanted to feel helpless; everyone wished they could do something.

So that spring, Mike and Liz signed up to do their first Epilepsy Foundation Walk in Wheaton. They chose the name Jack’s Army. Friends and family volunteered in numbers to rival the wave of conscripts that followed Pearl Harbor. Uniformed in camouflage t-shirts on a cold May morning, Jack’s Army began its determined march forward. 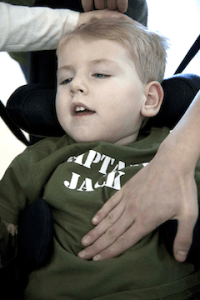 Fast-forward more than two years. All the known tests for rare conditions had come back negative, which is always a good news–bad news proposition; as each clean test took a bad diagnosis off the table, the trail to find answers grew a bit colder.

Mike and Liz learned to take one day at a time and celebrate small successes. Jack continues to grow, as did his signature blond hair, which Liz likes to keep in a handsome, no-nonsense buzz cut. He has a killer smile that his family frequently sees. The brave, strong warrior is working hard with therapists of all stripes. And in ways that are bittersweet but nothing short of miraculous, he has taught everyone who knows him that they are stronger and have a greater capacity for love than they ever knew possible.

Jack welcomed a new brother, Matthew Presto Pribaz, born on November 18, 2010. He is a healthy boy (and Mike and Liz thought they were tired before Matt came along!). Matt has added a happy new chapter in the family story.

But Matt wasn’t much older than two or three months before he started to surpass his older brother in developmental milestones. At two-and-a-half years old, Jack continued to suffer from low muscle tone—a condition that prevents him from controlling his own head or sitting unassisted. In November 2011 he required surgery to place a g-tube, or feeding tube, to help him get his nutrition. Jack cannot speak. What his cognitive ability or prognosis are remain a mystery. In addition, Jack suffers from what his doctors call “startles,” tiny spasms that last less than a second but come on repeatedly when Jack tries to fall asleep. This condition, while harmless,  lead to an overall loss of sleep for the entire family, because when Jack cannot sleep he often cries inconsolably. Melatonin helps him to relax sometimes, but not always.

It has been terribly frustrating for Mike and Liz not to know what Jack is experiencing, feeling, or thinking. But they have chosen to stay positive. They read to him, talk to him, play with him. Jack has a favorite book and stuffed animal, the trusty green dog Scout. Mike and Liz understand Jack has limited ability to respond, but no one knows what he might be taking in. And no one really knows what the future holds—an uncertainty once maddening that now makes room for hope.

In July of 2011, doctors at CMH learned of a newly available genetic test.  Jack seemed like a good candidate, and so another vial of his blood was tested. Mike and Liz were by now used to tests being sent off without any answers returning. It was a huge surprise in August, then, when the result came back positive. Jack’s had a rare genetic mutation of the gene called KCNQ2.

Mike and Liz were immediately tested themselves. Neither had the mutation. This meant that Jack had not “inherited” this condition. Jack’s doctors pointed out that knowledge of this mutation was just in its earliest stages. Researchers believe that this gene regulates potassium channels (which are instrumental in muscle control).  Mike and Liz were told about a newly approved drug, Potiga, that might help Jack.  They waited impatiently for the drug to come to market.

As soon as they had a name—KCNQ2—to focus on, Mike and Liz started searching for any information they could find. The trouble is that there wasn't much research published yet, at least not for a lay person to digest. The field was too new.

Although novel (or "de novo") mutations of KCNQ2, like Jack’s condition, are rare (Jack was one of a handful of known cases), researchers think more patients will be discovered as the testing becomes more readily available. They are interested in studying KCNQ2 for the secrets it might unlock about the mechanisms at work in epilepsy more broadly.

So while Mike and Liz waited for the new drug, they moved into action mode. Overwhelmed by the generous support of people who know Jack’s story and enlisted to help, they established the Jack Pribaz Foundation to assist researchers in learning all they can about KCNQ2 encephalopathy.

And Jack Wyatt, who doctors at one time worried would not see his first birthday, turned three on March 5, 2012. He attended a special preschool the very next day.